New Street Tech launches FAR on the side-lines of UNGA

Imagine a world where the flow of money is not chained by lack of information, where capital flows freely yet securely to the right stakeholders. A world where credit from legitimate formal sources help improve the lives of millions of families that have their lives and livelihoods split across different countries.

Last week, I had the privilege of unveiling an innovation that does just that. Representing New Street Tech in an event at the United Nations Head Quarters, on the side lines of the UN General Assembly in New York, it was my honour to announce the launch of FAR [Finance Against Remittances] from UAE to Nepal - the first ever FAR corridor globally. FAR runs on MiFiX, our proprietary Blockchain-powered ecosystem that connects money transfer providers in countries where migrant workers are employed, with banks in their home countries.

To give FAR some context, consider this – over 250 million people live and work in a foreign country having sacrificed a life with their family in return for a livelihood. And in their productive years these migrant workers contribute to the making of TWO economies. For example, a construction worker in Dubai doesn’t just build a skyscraper in the UAE, the host country; the money that he earns in Dubai and remits back home also helps build that nation - his home country. A staggering USD 600 billion+ in migrant remittances moves across 200+ corridors globally, annually. The consistency of these cross border flows and its macroeconomic impact renders it a very valuable proposition for all stakeholders involved - Remitter, Beneficiary, Money Transfer Operators (MTO), Banks, Governments alike.

The remittances industry has over the years witnessed a lot of innovation and competition, making frictionless, almost instantaneous, and price efficient flow of cross border remittances a reality. However, more recently, the following factors are posing challenges to the continued development of this industry and to the improvement of the migrant worker’s life.

- Rising cost of living, reduces wealth creation opportunities for a migrant worker in the home country. He needs access to credit during his productive years to create assets and livelihood options for his dependents and himself when he returns. But financial institutions in the Home country do not have enough information on the migrant to offer him credit and other financial services

- Price compression, rising cost of compliance, regulatory actions against money laundering etc. have rendered the remittances business less profitable for MTOs and Banks. They need their cost of operations to go down, especially their cost of acquiring and retaining customers

- Geopolitical changes have seen host countries becoming less welcoming of migrants, preferring that they don’t become a burden on these economies past their productive years. They would rather encourage them to build sustainable livelihoods back home, and the same is preferred by home countries too, who would love to see their migrant sons and daughters of the soil return back to a productive life and continue their contribution to the economy

- The regulators while being keen on stopping suspicious cross border money flows, are ending up creating barriers for legitimate migrant remittances to flow through at lower costs.

Its all these challenges that New Street Tech has risen to resolve with just one stroke of innovation - enabling FAR on MiFiX (our proprietary Blockchain enabled ecosystem) - by bringing information harmony and distributed processing capabilities to all stakeholders.

MiFiX already has thousands of customers and millions of dollars of financial services products delivered on behalf of our partner Banks, NBFCs, P2P lending platforms, Business Correspondents, Insurance Companies and other parties. By simply enabling MTOs in the host country as partners on the ecosystem we have made available reliable and immutable KYC and credit related information on remitters so that lenders can provide credit to the dependents of the migrants in the home country. Stakeholders can now receive information about the migrant, who regularly remits money, to build a credit profile, complete with KYC, proof of employment, and a track record of regular payments. They can then use this profile to provide credit and other financial services to workers’ families, supported by seamless remittance facilities that assure them of timely repayments.

A win-win for everyone involved.

- Migrant workers can get access to financial services in their home countries, and their families can access savings products, investments or cheaper credit through formal channels.

- Banks see a jump in high quality assets backed by assured remittances along with the added benefit of cross-selling other services.

- This is not just a means of creating widespread social impact, but collectively to the stakeholders, a $20 billion revenue opportunity has been unlocked which has remained evasive until now.

New Street Tech came together with Al Fardan Exchange, UAE, Laxmi Bank, Nepal; and with some support from the UNCDF, and our development partner KrypC Technologies; have launched the first ever FAR corridor globally – a business we all believe will create a huge positive commercial impact while making the world a better place, no matter where you live or work. 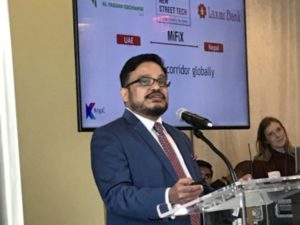 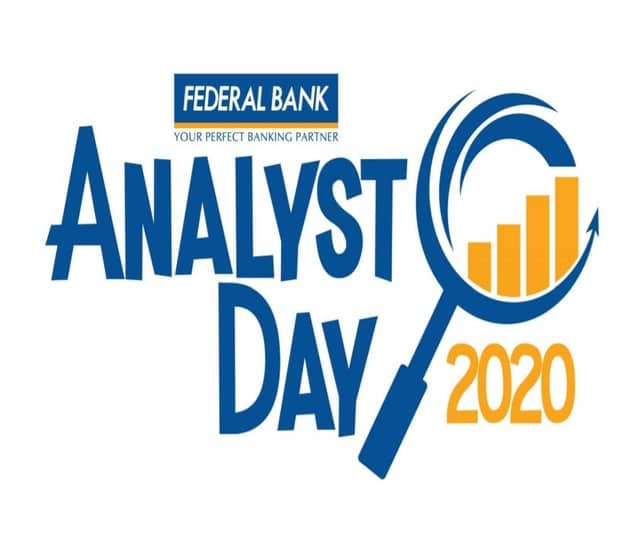 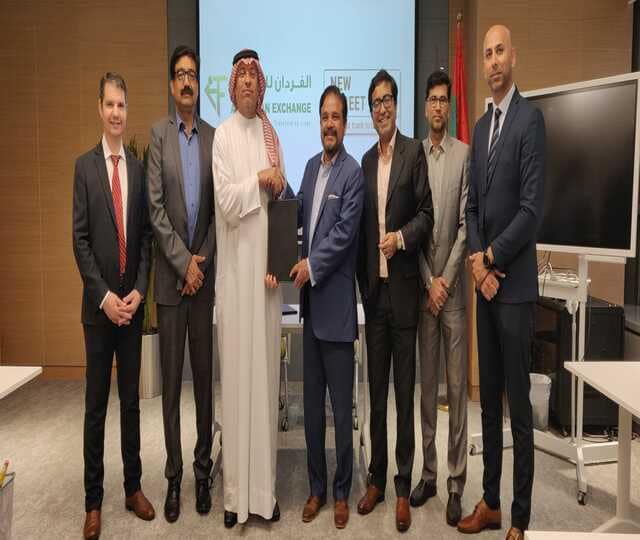 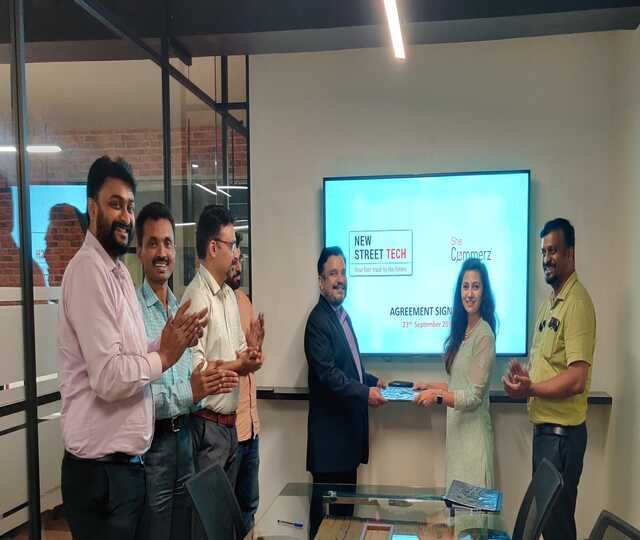 Sajeev is the Founder of New Street Tech. He brings to New Street his vast experience in banking, microfinance, payments and technology.  He has run multi-billion-dollar businesses, built and managed high performance organisations across the globe and has a passion for leveraging disruptive technologies in enhancing conventional business models.

Sajeev served at Citigroup for over 18 years, and in his last assignment there, was Managing Director, Global Receivables and Trade Finance.  Most recently he was Executive Director & President, Earthport PLC an LSE (AIM) listed payments company headquartered in London. Previously, Sajeev held the position of MD & CEO of Bhartiya Samruddhi Financial Services (a part of the BASIX Group), a well-known microfinance company in India. Sajeev is a Non-Exec Chairman of Shecommerz Market Services Private Limited. Sajeev has also served as Advisor to banks, technology and retail distribution companies.

Management professional with 11 years of rich experience in handling large scale IT/ Non-IT projects, process, product improvement, hardware support and escalation management with Executive leadership towards technology & organizational growth. Excels at leading cross-functional teams and coordinating multiple projects.
Natural helper who loves working through people’s problems to find the best solution. Is a quick learner who is self-motivated and able to work well independently as well as in a team. Leads by example to ensure the execution of all process, policy, tools adherence and overall knowledge improvement among the outsourced partners.

Vellayan Subbiah, Managing Director holds a Bachelor of Technology in Civil Engineering from IIT Madras and a Masters in Business Administration from University of Michigan. He has over 23 years of experience in varied fields viz., technology, projects and financial services. He has worked with McKinsey and Company, 24/7 Customer Inc. and Sundram Fasteners Ltd. He was a recipient of the Extraordinary Entrepreneur of the Year – TiECON 2014 Award. He was the Managing Director of Laserwords Private Ltd from 2007-10 and of Cholamandalam Investment and Finance Company Limited from 2010-17.

Srikrishna Ramamoorthy is Partner at Unitus Ventures. Srikrishna is an experienced entrepreneur and early-stage venture capital and private equity capital investor in India. He heads the India operations for Unitus Ventures, having joined the fund as Partner to setup the India office in 2012. Srikrishna received his Bachelor of Engineering in Computer Science from R. V. College of Engineering, Bengaluru University.

Ravi Jagannathan is a serial entrepreneur, with over 30 years of experience in building deep-tech ventures. He created successful ventures including eMudhra (a Certifying Authority) & Taxsmile (an Online tax filing portal). From Digital Signature to wallet to blockchain, his new venture KrypC Technologies (a global blockchain tech/research company) emphasizes the objective of innovation through technology. Ravi is a member of Blockchain Expert team that advices UN/CEFACT in matters relating to Blockchain use in Trade Facilitation Processes that includes Energy Trade. Ravi is also actively engaged in start-up space both as angel investor & mentor. A Fellow Member of the Institute of Chartered Accountants of India, he has provided management & JV consulting services to global clients.

Mr. M. V. Nair is the Non-Executive Chairman of the TransUnion CIBIL (India’s largest Credit Bureau) & that of KFINTECH Pvt. Ltd, leading Registrar & Transfer Agent. He is an advisor to select private equity & venture backed companies. He is also part of the High-Level Committee on Corporate Insolvency & Liquidation set by the Insolvency & Bankruptcy Board of India. Mr. Nair had served as the Chairman & Managing Director of Union Bank of India & Dena Bank for over 7 years. He was the Chairman of the Indian Banks Association (IBA) & the Chairman of the Committee set up by the Reserve Bank of India to assess the Priority Sector Lending norms in the Country. He has served on several committees in the Confederation of Indian Industries (CII) & the Federation of Indian Chambers of Commerce & Industry (FICCI).

Naveen is a management postgraduate with a dual degree from Amrita University, India & Buffalo University, New York, USA, with a master’s in service management. His industry experience spans managing Corporate Relationships in the Remittances and Forex sector across the UAE and India. Naveen managed new business acquisitions and channel management in reputed global organisations such as UAE Exchange & Wall Street Exchange. His last held position was with Wall Street Exchange as Area Head, Abu Dhabi for handling Corporate & Retail sales of the region.

Kishore has substantial experience in the field of Payments and Microfinance, across India and the Middle East. His last assignment was with Earthport PLC, an LSE (AIM) listed payments company headquartered in London where he was part of the Global Strategy Team. Prior to that he worked with Davinta Technologies, a technology start-up in the Micro Finance space as an Operations Manager where he was a member of the team that launched the company’s Digital Financial Inclusion business across India. Kishore is a management postgraduate with a dual degree from Amrita University, India & Buffalo University, New York, USA, with a Masters in Operations Management.

Andy is the Chief Commercial Officer of New Street Tech. He is a seasoned global sales leader, who has been growing technology business across geographies for over 15 years. He brings to New Street his vast experience in building high performance global sales teams. He has incubated new business verticals across geographies and orchestrated multi-million-dollar deals from initiation to closure.

Andy is passionate about bringing disruptive technologies across business verticals and deliver a value proposition which brings significant benefit to stakeholders.

Mohit is Co-founder and Non-executive Director of New Street Tech. He is an experienced payment executive, who has been working in the global remittance industry for over 20 years. He has extensive hands on experience of setting up and leading global teams and operations and managing relationships with banks/financial institutions and regulators at the senior most level. He served as the CEO of MoneyGram International, Travelex Money Transfer and Coinstar Money Transfer. Mohit is the Chairman of the International Association of Money Transfer Networks. He also serves as a Non-executive Director on the Board of, and as an Advisor to several payment companies globally.